From left to right, Dave Murray and Hugh Lampkin. | Photos by Amanda Siebert

How Drug Users Would Solve the Opioid Crisis

Users say they want to end prohibition, seek reparations, and get invested in pain alternatives like weed. In Vancouver, that’s already happening.

David Murray describes himself as a veteran of the war on drugs. He maintains it’s not heroin that’s hurt him the most, but prohibition and the criminalization of addiction.

« My whole life has been consumed by the drug war, » Murray says.

He’s spent years on the street, had run-ins with police, and seen the inside of a prison. But that was all in a past life, Murray told VICE. He’s still addicted to opioids. But he left the hustle and the hassles that come with it years ago. Murray found activism and became a high-profile member of the Vancouver Area Network of Drugs Users (VANDU). He’s also one of North America’s first patients to receive diacetylmorphine—the medical term for heroin—via Canada’s health-care system. Instead of buying from a dealer, Murray visits Crosstown Clinic in Vancouver’s Downtown Eastside and receives a prescribed dose of pharmaceutical-grade opiates.

I recount all of this to emphasize that when I ask Murray for his advice on how Canada should respond to the overdose epidemic, he knows what he’s talking about.

“We need to end prohibition,” Murray says. “We need to bring an end to the drug war. »

He recommends decriminalization: removing penalties for personal possession. Then legalization: bringing supply under the control of the government, where quality would be regulated to minimize the risks of fentanyl and other dangerous substances.

“I’m talking about the end of the drug war, including amnesty, and reparations,” Murray says.

“How do two countries end a war? One side either wins or they make an agreement of some kind. And there are reparations.”

Anything less would be unjust, says Murray. “Really, to make it fair, there would have to be reparations.” 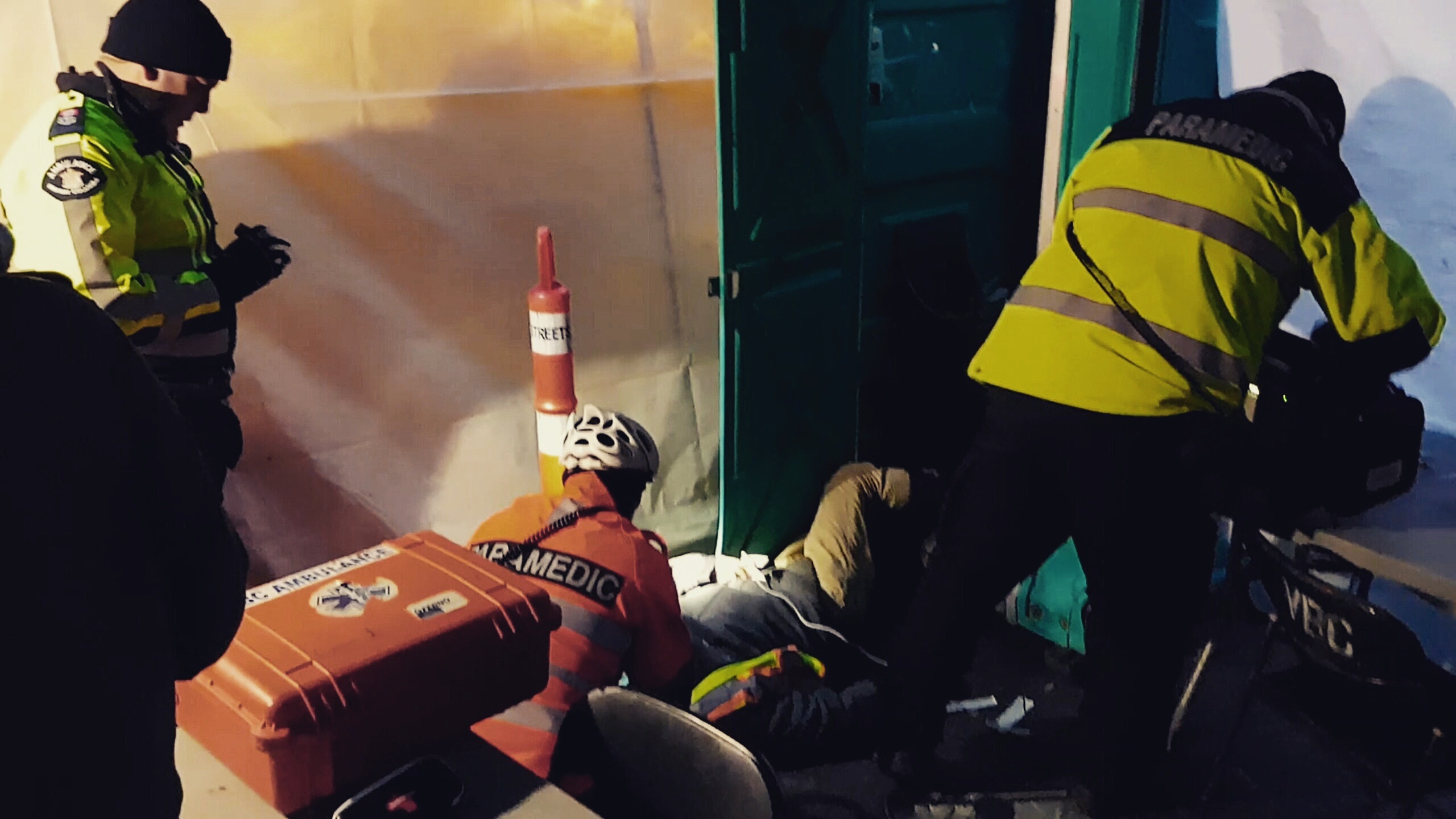 To many, that likely sounds radical and unrealistic. But the problem for which I sought Murray’s advice is similarly without precedent. This year, an estimated1,500 people in BC are expected to die of an illicit-drug overdose. That compares to an average of 204 deaths each year from 2001 to 2010.

Vancouver—Canada’s petri dish for harm-reduction and progressive drug policy—has already moved further in the direction of legalization than most people are aware.

The Vancouver Police Department (VPD) has recorded fewer drug crimes every year since 2010. From 3,480 that year to 2,291 in 2013, to 1,545 last year. The force has stated publicly that low-level possession offences are no longer a “policing priority.”

This trend toward de-facto decriminalization is mirrored in other areas of governments’ responsibilities.

Four of BC’s largest social-housing providers—the Portland Hotel Society, Atira Property Management, RainCity Housing, and Lookout Emergency Aid Society—have all integrated into their buildings what they call “shared-using rooms,” where tenants are told they should bring drugs to inject there in relative safety. Together, these nonprofit organizations receive tens of millions of government dollars every year and, inside their buildings, they have all essentially decriminalized drugs.

In more visible spaces, BC’s government has similarly opened what it calls « overdose-prevention sites. » There are more than 20 of these locations across the province, where people can bring illegal drugs and inject them under the supervision of staff.

More recently, just last Friday (November 11), BC’s new minister of mental health and addictions, Judy Darcy, announced the government was making fentanyl-test strips available. That is, the minister encouraged people to bring illegal drugs to government facilities where, instead of confiscating them, authorities will help users understand what’s in their drugs and then hope they’ll use them in as safe a manner as possible.

Zoë Dodd is an organizer with the Toronto Harm Reduction Alliance and part of a team that’s run an unsanctioned “pop up” injection site in Moss Park since last August. She tells VICE that Ontario remains years behind BC on harm reduction, and argues if it doesn’t catch up fast, it’s going to cost people’s lives.

“All we’ve seen [since fentanyl arrived] is an increase in cops and enforcement,” Dodd says. “Police are still going after people for low-level possession.”

Ontario can’t replicate every reform that BC has overnight, she says, but certain policies are ready for immediate implementation. For example, Ontario could instruct police to stop responding to overdose calls and instead let fire and ambulance services take those, as Vancouver has for years. Dodd says she also wants shared-using rooms incorporated into Toronto social-housing projects as soon as possible. “These are solutions that could really help,” she says.

Sarah Blyth, who helps run the dispensary, tells VICE it makes marijuana available as an opioid substitute. “It can help with pain from withdrawal,” she says.

The small operation employees past and present drug users and Blyth notes that’s proved beneficial to clients. “It’s people from the neighbourhood helping each other,” she explains, noting Insite has employed drug users since its founding. “I haven’t seen a better model. Because they understand. There’s empathy. They’ve used those drugs and know where people are at, what their options are, and where they’re coming from.”

All of these responses to BC’s fentanyl crisis are the latest developments in a long evolution of progressive drug policies in Vancouver.

Officials believe that BC’s emphasis on harm reduction is working, at least in the way that a finger in a dike works to slow a flood. On November 9, the province’s chief coroner, Lisa Lapointe, told CBC News that without these programs, it’s possible BC would not see 1,500 fatal overdoses in 2017, but closer to 4,500 deaths.

Getting Vancouver this far down the road to legalization was not easy.

In Fighting for Space: How a Group of Drug Users Transformed One City’s Struggle with Addiction, a new book out this month, I recount how Vancouver’s struggle was led by drug users and their allies. Through the 1990s and early 2000s, this group based in Canada’s poorest postal code, the Downtown Eastside, demanded a say in drug-policy reform.

Their story began in the early 1990s. A nurse named Liz Evans, just 25 years old, was given a beat up old building on East Hastings Street and filled it with tenants who struggled with severe addictions to drugs.

Revolutionary at the time, Evans gave people rooms without conditions. They would not be evicted for using drugs or if they suffered a disruptive mental-health crisis. The organization she named the Portland Hotel Society transformed how BC provides homes for its most marginalized citizens.

Meanwhile, a single mother with a fiery activist streak named Ann Livingston began plastering the neighbourhood with fliers, asking drug users if they would meet her in a Downtown Eastside park. When they did, Livingston asked them what they needed most. The answer was a space where drug users could meet and maintain their addictions without fear of police harassment, and where the risk of a fatal overdose was minimized.

In 1995, Livingston opened an unsanctioned supervised-injection site that was likely the first in North America. They called it Back Alley and, though the chaotic experiment didn’t last long, a noteworthy obit ran in a Downtown Eastside community newsletter.

“The idea that users can organize themselves is starting to grow, » it read, « and even if…Back Alley were to shut down tomorrow, the idea that we must take control of our own lives, and that we have the numbers and the knowledge to do so, is here to stay.”

In 1997, Livingston partnered with Bud Osborn, a Downtown Eastside poet and a drug user who was originally from Ohio. The two of them along with dozens of addicts founded the Vancouver Area Network of Drug Users (VANDU). Last September, the organization marked its twentieth anniversary.

Over the following decade, VANDU and the Portland Hotel Society waged a political street fight against the governments of Vancouver and British Columbia. They picketed health-board meetings, occupied City Hall, and marched with bullhorns literally screaming for a say in the policies that affected them. In doing so, they forced the regional health authority to a drop one-for-one requirement for needle exchange that had contributed to an explosion of HIV and other infectious diseases. In 2003, the Portland Hotel Society opened North America’s first sanctioned-injection facility, Insite. In 2014, long-time heroin addicts worked with physicians at Crosstown Clinic to take North America’s first prescription-heroin program beyond the confines of a clinical trial.

Not a ‘free for all’

Like Murray, Lampkin maintains the fentanyl crisis will only get worse until the drugs that people use are supplied by the government. He emphasizes he doesn’t like the word « legalization. »

« You don’t want people to think it would be a free for all, » he explains. « Regulation » is the term Lampkin prefers.

« With regulation—or my version of it—you don’t have to set up anything new, » Lampkin says. « The infrastructure is already there. You would use the pharmacy system. » He notes an opioid prescription would require regular visits to a doctor. « Kids would see that it’s not a big party, » he adds.

A number of prominent BC politicians have said that, because of fentanyl, it is time to at least begin talking about the sort of regulation-heavy version of legalization that Lampkin describes. They include Dr. Hedy Fry, Liberal MP for Vancouver Centre, Don Davies, NDP MP for Vancouver Kingsway, and Andrew Weaver, leader of BC’s Green party, among others.

Asked what he would do if placed in charge of the government’s response to fentanyl, the president of the Canadian Association of People Who Use Drugs (VAPUD), Jordan Westfall , focuses on pragmatic options and thinks short-term. He lists policies that could be deployed to begin reducing overdose deaths as soon as tomorrow.

The first is the declaration of a nation-wide health emergency.

The second Westfall mentions is for Health Canada to dispatch small and agile harm-reduction teams to any area where there’s a sharp increase in overdose deaths. These teams could establish « pop-up » overdose-prevention sites like those activists pitched in Toronto and Ottawa last August, Westfall explains. « If this is an emergency, hire a few of those people to go across the country to set up tents wherever they may be needed. »

And a third: “Let’s stop and freeze any policy change that might increase overdose deaths, » Westfall says. For example, he notes that doctors, pummeled by the media in recent years for over-prescribing opioid painkillers like OxyContin, are cutting people off of drugs to which they’ve grown addicted. An unintended consequence is that many are turning to heroin, and then instead finding fentanyl.

Westfall acknowledges that over-prescribing is a problem, but argues it’s one that cannot be tackled without consideration for the challenges posed by fentanyl.

« We’re trying to get people away from prescription pills, » he says. « But when we do that, we forget that people who will continue using opioid drugs could end up dying because of that.

Travis Lupick is a journalist based in Vancouver. His first book, Fighting for Space: How a Group of Drug Users Transformed One City’s Struggle with Addiction, was published in November 2017. You can follow him on Twitter,Facebook, and Instagram.