Evidence Builds for Medicinal Use of Psychedelic Drugs

There was a span of a little more than a decade in the 20th Century when scientists thought that mind-altering drugs like LSD might be the key to treating psychiatric illnesses. These efforts ground to a halt in the early 1970s, by which time the research had gained a checkered reputation.

Part of the problem was that researchers had trouble designing rigorous studies, but, « More infamously, egregious violations of ethical protocols, such as lack of informed consent (in some cases through military or intelligence agency–supported research) resulted in substantial and long-lasting harms to some patients, » a team of psychiatric and psychedelics researchers from the United States and Canada wroteSeptember 8 in the Canadian Medical Association Journal. « Furthermore, unsupported claims about purported benefits of psychedelics, and sometimes explicit encouragement for non-clinical use, by some members of the research community, may have contributed to unsupervised and uncontrolled recreational use of psychedelic substances. »

Since then, most psychedelics have been classed as « drugs of abuse » with no recognized medical value, they wrote. But in recent years, researchers have started to cautiously explore whether these drugs can in fact be used to treat illnesses that include addiction, depression, anxiety and post traumatic stress disorder. In the new paper, the group collected a few of these preliminary studies and weighed the potential benefits and harms of using psychedelics for therapy.

« These substances [were] associated with a really pivotal cultural point in our history and so really it took a few decades for that turbulent time to pass, » coauthor Matthew Johnson of Johns Hopkins University in Baltimore, Maryland, said in a podcast for the journal. « Now we can sort of evaluate the medical benefits and risks of these compounds when cautiously applied in a medical setting…and keep in mind that that is different in many ways than what we may see in an illicit use setting. »

Seeing beyond the anxiety

Psychedelic drugs alter conscious experience by causing hallucinations and a feeling of heightened awareness. Some of these drugs, including LSD, mescaline and psilocybin, mimic the neurotransmitter serotonin. « Many of these substances are found — or are close analogues of chemicals found — in plants or fungi used traditionally for millennia in spiritual or folk healing rituals, » wrote the researchers, mentioning ergot fungus and the peyote cactus.

Researchers have investigated whether these drugs could be used to treat people’s anxiety in the face of terminal illness. A 2014 study with 12 patients found LSD useful for easing anxiety. When researchers followed up with nine of the people a year later, they found that the participants had sustained the benefits of using LSD and hadn’t been plagued by bad trips or flashbacks. 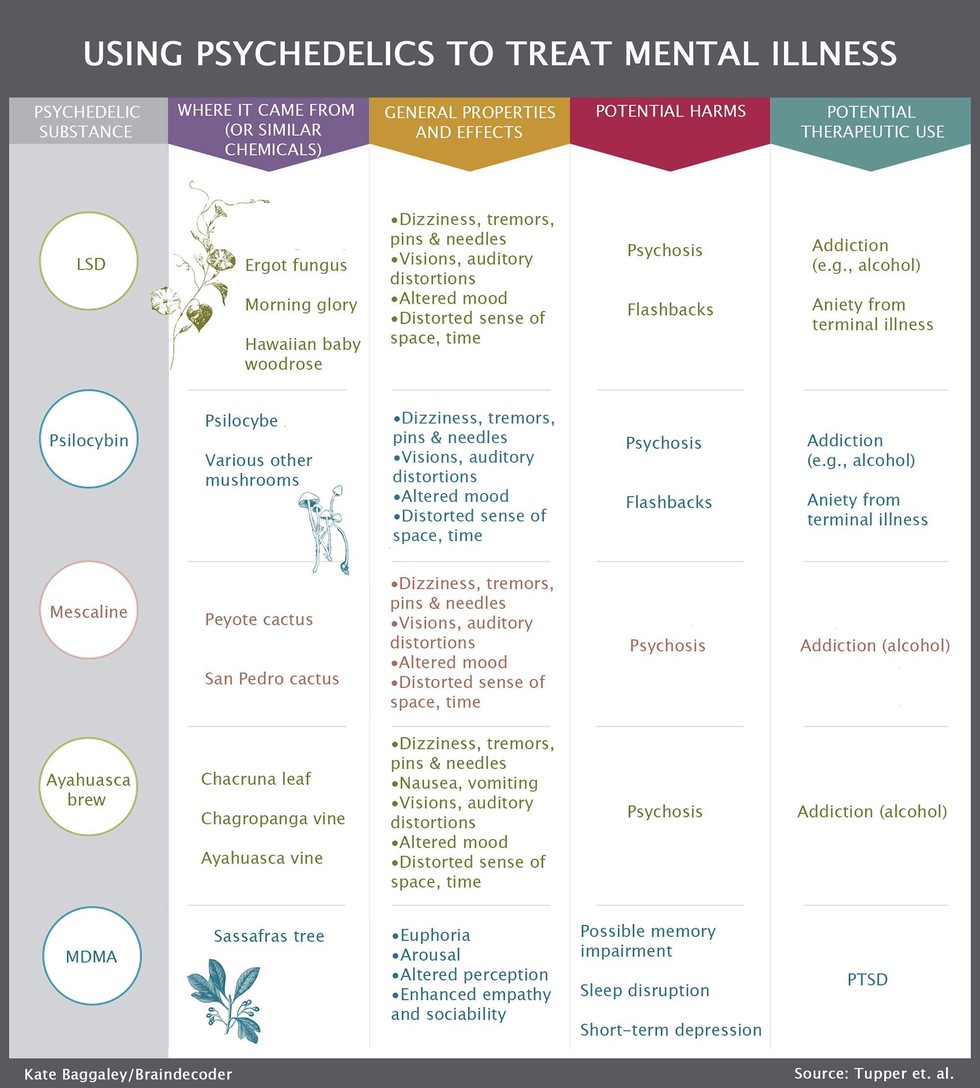 Another group gave 12 people with end-stage cancer psilocybin, the compound found in magic mushrooms. In this trial too, the psychedelic soothed people’s anxiety and improved their mood without dangerous side effects. Johnson, who is seeing similar results in his research, said, « Many of our cancer patients have said that before the treatment they weren’t living life, they couldn’t stand to make plans for anything in the future because thoughts of the future just brought up this horrific flood of worries and sorrow that they just couldn’t even deal with. »

It’s not exactly clear what psilocybin does to change that. « The anti-anxiety effects we see long-term are not at all a result of the acute effects of the substance, because that’s long out of their system—it’s more like a life experience that can help to change their orientation…It often seems like a big-picture life review, » said Johnson.

Psychedelics against fear and addiction

Researchers have also tested psilocybin as a treatment for addiction. People who were dependent on alcohol reported about half as many drinking days after a course of therapy and psilocybin, though some of the participants said they had headaches and nausea. The participants had kept most of these gains when the researchers (who published the findings in March) followed up with them after 36 weeks.

Another group of researchers tried psilocybin on smokers. After six months, 12 of the 15 participants were successfully abstaining from cigarettes. In this case, the self-reports were verified with an analysis of their breath and urine.

Other researchers have become intrigued by the Amazonian folk medicine ayahuasca, which contains DMT, a chemical relative of psilocybin. After 12 people from the Coast Salish First Nations community in Canada with various addictions took ayahuasca over a period of six months, they reported using less alcohol, tobacco and cocaine (their cannabis and opiate use stayed the same).

Research has also found hints suggesting that people with post-traumatic stress disorder might respond well to MDMA, or ecstasy, which works by encouraging cells to release more serotonin. In one study, after taking MDMA, symptoms eased in 83 percent of a group of people who’d had PTSD for an average of 19 years. In contrast, only 25 percent of the people in another group, who got placebos, experienced relief. But in another study, when researchers assessed people with PTSD who’d taken MDMA, they couldn’t find a statistically significant differece between them and others who hadn’t. However, the participants’ self-reported conditioned improved.

Despite all of these potential benefits, psychedelic drugs do come with a few risks. People who have or are predisposed to psychosis or bipolar disorder are more likely to have a psychotic break after using psychedelics. There is also a small chance of experiencing vivid flashbacks and, more commonly, spikes in fear, anxiety, heart rate and blood pressure while the drug is active. « Without careful supervision, fearful responses could lead to dangerous behavior (for example, fleeing the study site), » noted the authors, who maintain that physicians can plan for these situations and that none of the research they reviewed found any long-term harm. « The reemerging paradigm of psychedelic medicine may open clinical and therapeutic doors long closed, » they concluded.

Currently, the researchers are continuing to investigate whether psilocybin can relieve the anxiety and depression that people experience when they receive a potentially terminal diagnosis. « The findings that we’re seeing so far—and we have yet to publish these—but they’re very large effects that are much larger than the effect sizes you typically see with medications used to treat anxiety and depression in this population, » Johnson said.